Horse Farms For Sale in CT

Welcome to HorseProperties.net, the largest digital real estate community for equestrian property listings in the United States! We maintain a comprehensive, user-friendly site and make it easy to search for Connecticut horse property that meets all your needs and preferences. If you are currently searching for horse property for sale in Connecticut, we can help!

Looking for a large, fenced pasture where you can keep your horses during the warmer months? Or, perhaps you are looking for your dream luxury home located on a prime piece of equestrian real estate. No matter what type of property you are looking for, the agents who list property here can help you in every way, including:

We invite you to look through our many property listings, and contact the appropriate listing agent when you find a property that you would like to learn more about.

Windswept Acres, a beautiful private, Country Estate with custom design and architectural details which show the quality craftsmanship of this custom built home. The views looking over your276+ acres (more acreage available - up to 462 total) are breathtaking! The fields, barns, pond, gardens, golf range and private trails on the property provide you with great opportunities to enjoy hunting, fishing, farming, horses, farm animals, trail riding, ATV's, snowmobiling, and so much more. The spacious gourmet kitchen has granite counter tops, solid oak cabinets, 3 ovens, and a large island. 4 large bedrooms, each with their own private bath. Two Master bedrooms (one on the main level) have walk in closets, dressings rooms and private baths. The sitting room offers stunning views of your private pond and has a beautiful custom fireplace. The large family room, includes a wood stove and beautiful views through the transom windows. A nice sun room for enjoying the wildlife, pond views and sunsets! Need in-law space? This home has a private entrance leading to a great in-law space complete with 4 rooms 1 and 1/2 bath, an ample eat in kitchen, living room. There are multiple outbuildings including two large post & beam barns, one is 4000 sq. ft. with a concrete floor and 3 additional garage bays. There is a generator which provides power to the whole house. Two and half hours to NYC , one and half to Boston and under an hour to Providence or Hartford. 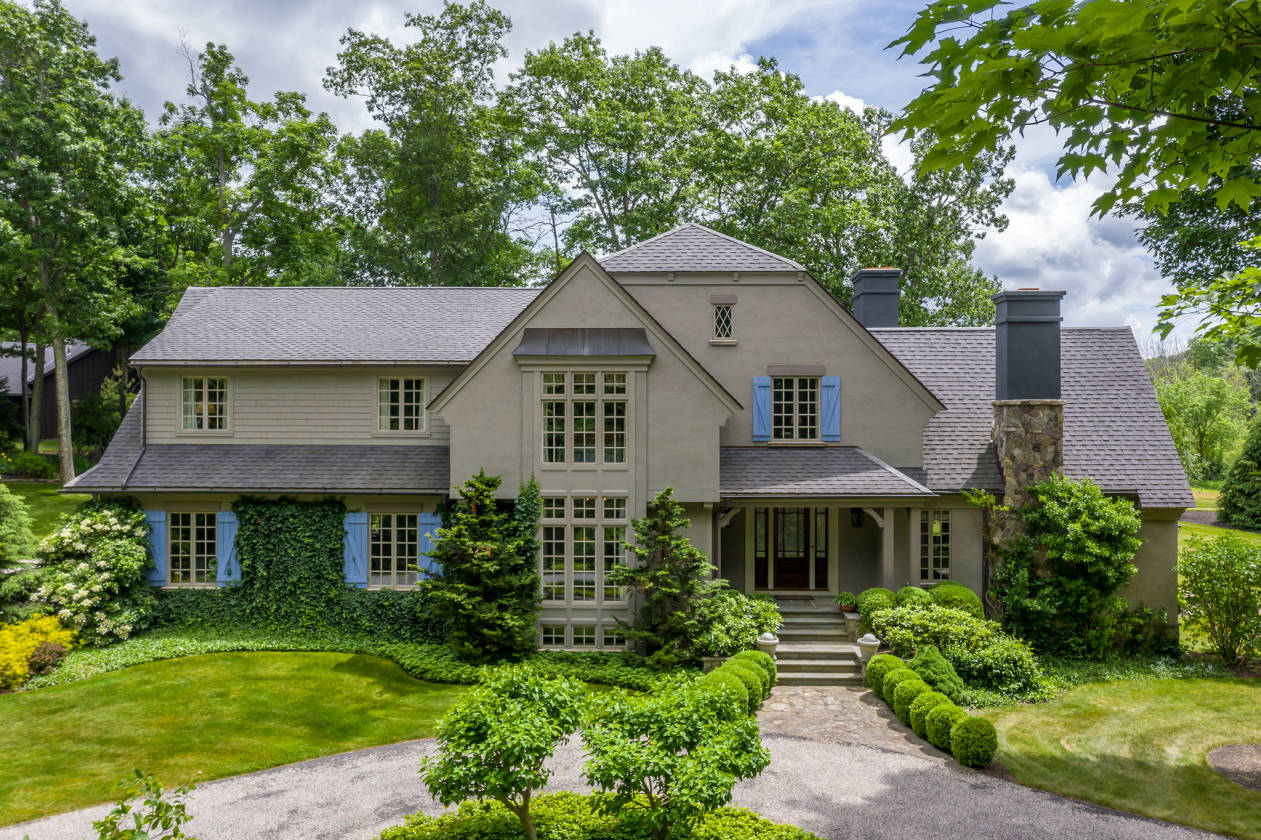 Beautiful level meadows surround this quality built 2,200 sq ft barn. Fully finished with private bath, balcony, heat, septic, and water. Riding trails abound in state forest and local preserve. Both the meadow and the barn can be totally customized to suit your equestrian needs. Situated in the renown historic village of Litchfield, Connecticut where there are still concerts on the green and parks to be explored. 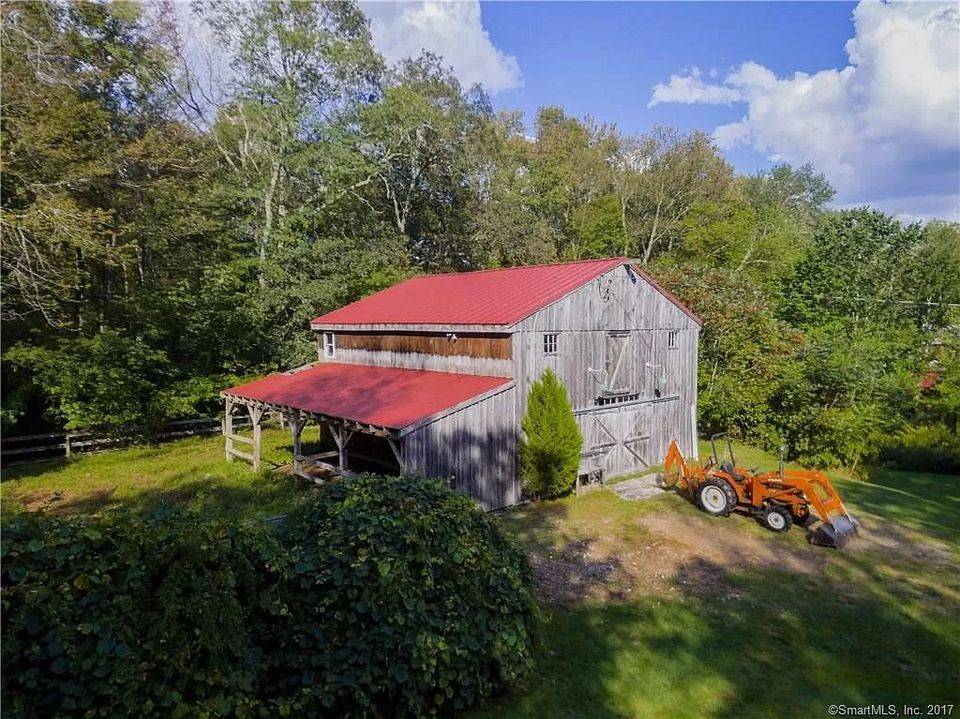 This is a great property for anyone who has a vision to make the land their own. 15.7 acres make up this amazing horse farm. Beautiful wooden barn within close proximity to the house. It has 4 stalls currently and 2 run-in stalls with the option to add a 5th stall and a tack room to next to it as well. Upstairs hay loft provides room for up to 3,000 hay bales or if desired could even be turned into living quarters for farm help. Walk out pasture behind the barn as well as a smaller paddock to the side of the barn. 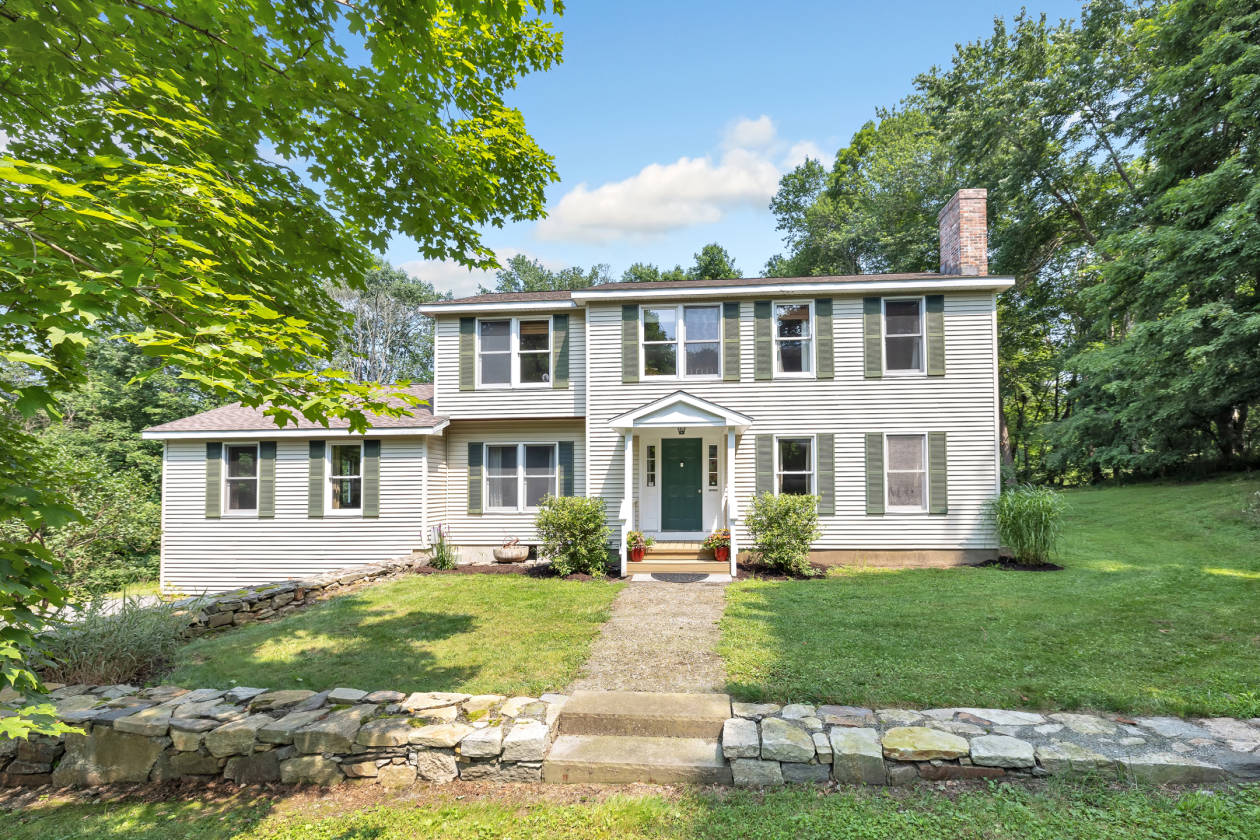 Bucolic 5+ acre property in the sought after Georgetown section of Redding, CT

Welcome to the Georgetown section of Redding!! This is suburban living at its finest. Blue ribbon schools, great restaurants, local grocery stores, and more can all be found in this well run town. Convenient to Route 7, the towns of Ridgefield, Wilton, Danbury & Westport, and close to the Branchville MetroNorth train station. Set back from the road, the long driveway ends in a bucolic setting. Enter through the front door and walk into a very inviting home. The recently redone kitchen features plenty of storage space, a gas stove, and screen doors that overlook the large deck and sprawling backyard. The land continues into the woods, allowing for great hikes and plenty of exploring. There is a cozy den where one can relax and unwind from the day. The other side of the first floor offers a large living room and separate dining area, if one so desires. The upper level features 3 bedrooms including a generously sized Master suite with an large bedroom, a spa-inspired bath with jetted tub and separate shower, and large walk-in closet. Laundry is located on the second floor making it all the more convenient. This home truly offers something for everyone. From a large basement and garage with high ceilings, all the way to the wood floors in the den, you can see the quality of workmanship throughout the home, and the pride taken in every detail. Make an appointment today to view your forever home!! Property was a farm at one time. Buyer to do their own due diligence regarding zoning. 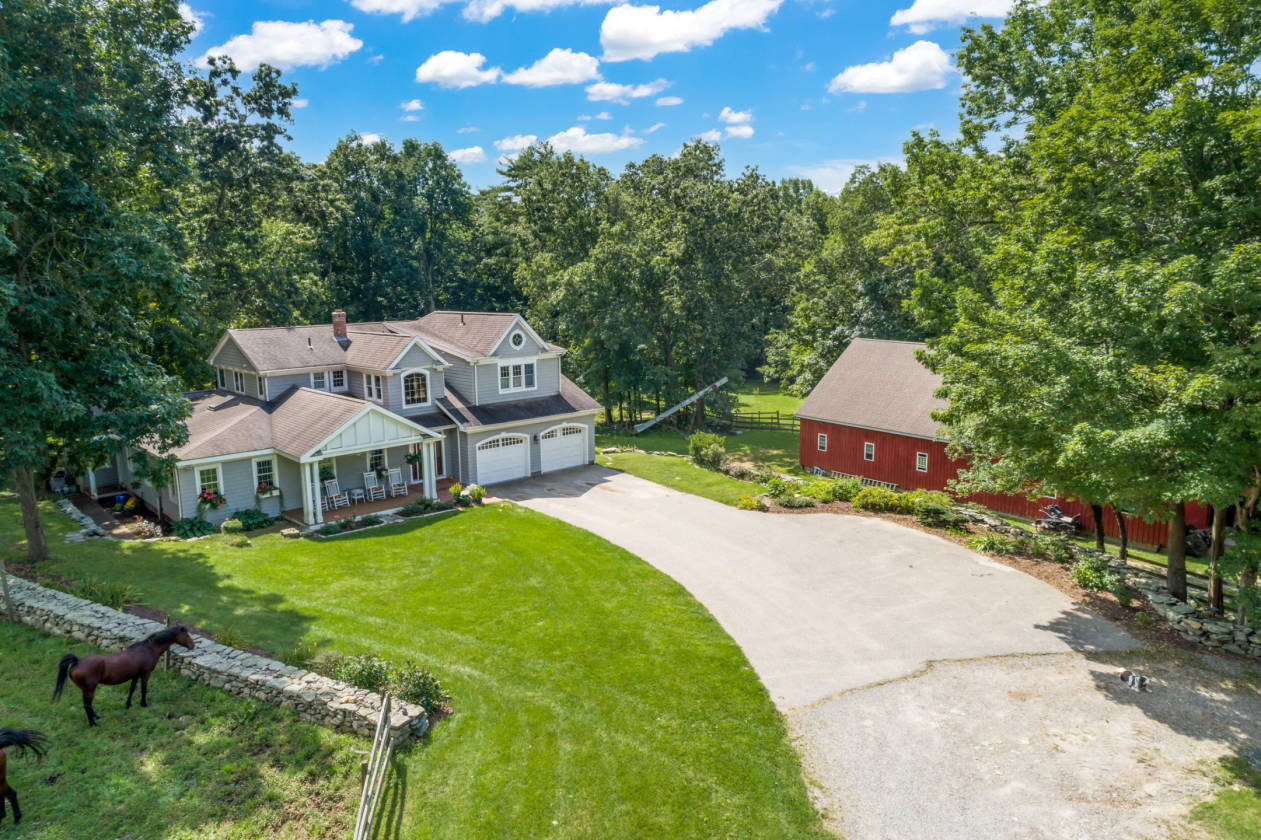 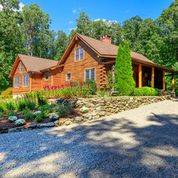 Beautiful private estate, meticulously maintained grounds on over 114 acres with cleared trails perfect for equestrians, hikers, runners, gentleman farmers, or ATV's. This amazing property features a beautiful log home with main floor master suite and an open kitchen dining area. Upstairs are 2 bedrooms, a small hobby room or office and open loft area. The living room has cathedral ceilings and woodstove. 2 car detached garage / outbuilding. Plenty of privacy yet just minutes to town, shopping, services, highway, and restaurants. Horse lovers will love the post and beam barn with plenty of hay storage and room with 4-5 stalls. The pole barn addition has two box stalls. Hydrant at barn, and electric to barn. Come hold your own hunter pace or just ride the trails or pastures. This is an amazing property located on the Putnam / Woodstock line. 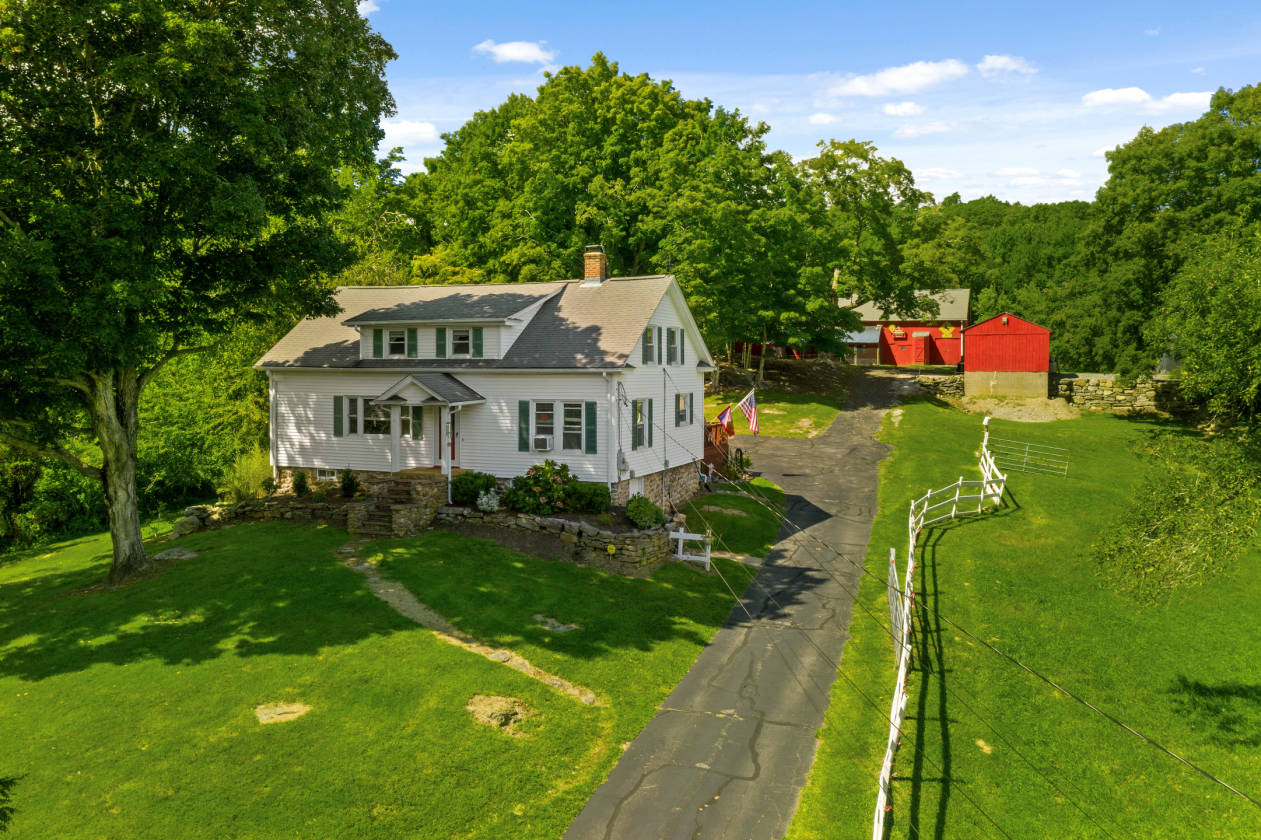 This country home is a Connecticut classic - white farmhouse on a hill with a red barn. Located on a quiet country road, but just minutes from main routes and shopping. The four-bedroom home is suitable for a big family or for one-story living - the master bedroom with bath and laundry are on the main floor. Original oak floors through the entire house. Well maintained and updated, the house is in move-in condition. Heat with oil (double tanks in the basement) or save money and use the gas stove in the kitchen. The gas oven and range will please the serious cook. Relax when a storm knocks out the power - you're pre-wired to run the house from your generator. The 5-stall barn features a tack room, freeze-proof hydrant for year-round water and a loft for hay. A second outbuilding makes a great workshop or more storage. Paddock space in the front and rear and a flexible riding ring just off the barn.

equestrian Boarding/training facility on 5+ acres. There is a 1800 square foot residential home on the property and a second home available for purchase if needed adjacent to the farm. 40 stall barn, heated indoor arena, wash racks, client locker area, office and retail area. 2nd building on property with office, bathroom and large space that was used as a party room. Property had a full functioning profitable boarding and lesson barn in it. Great opportunity. Offered at $1,650,000. Owner financing offered to right situation. 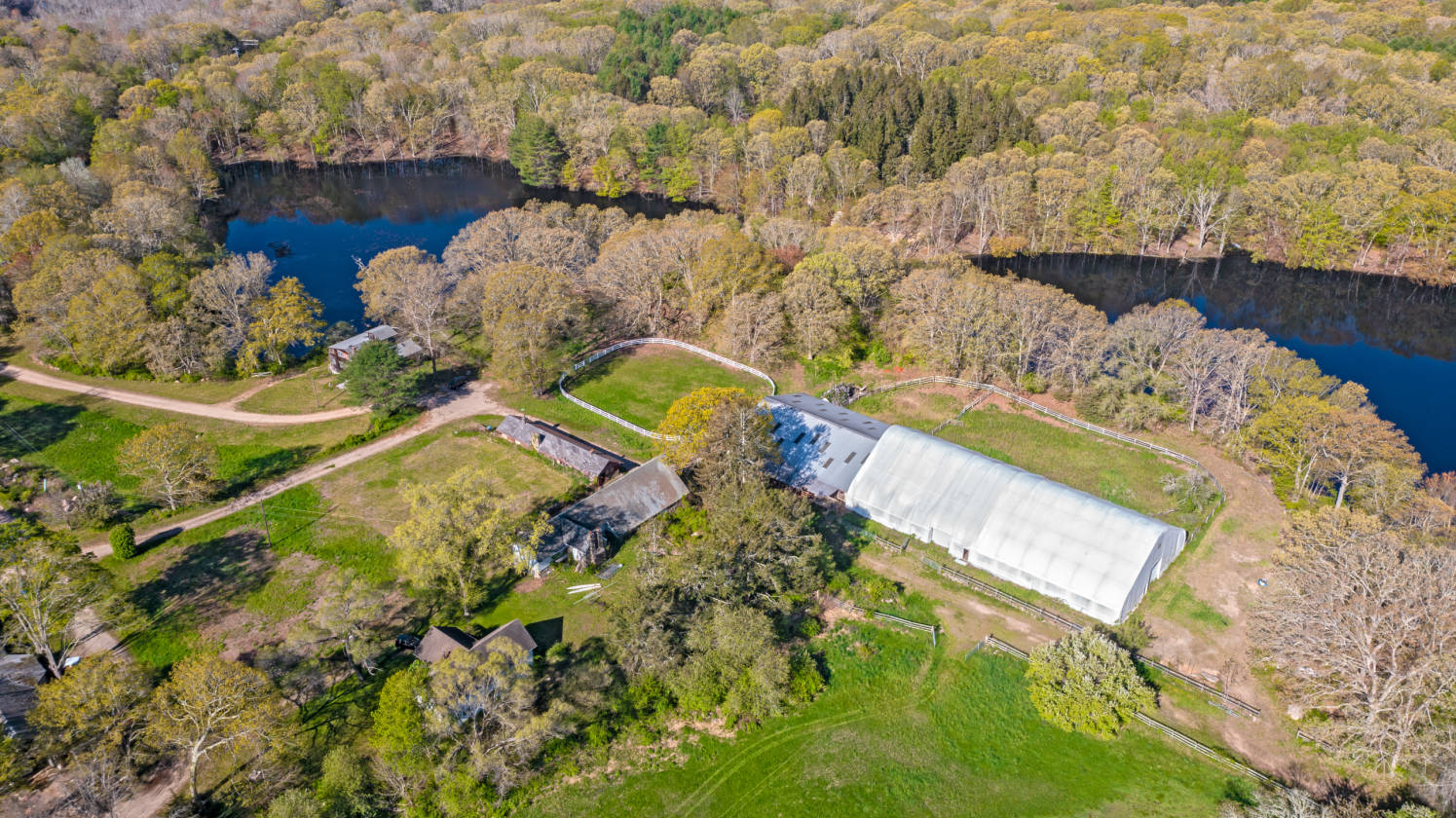 Steeped in the rich heritage of New England history, The McCulloch Farm roots date back to the Revolutionary War period. Originally owned by George Grant McCurdy, the driveway leading to the farm is part of the “Ancient Highway” aka “Benjamin Franklin Highway”, laid out by none other than Franklin himself. It passes by the main house and winds up into the woods that lay beyond. Along the bridle path this has become present day lies a stone marker engraved with the words: “15 miles to New London”. The historical nature of the property serves reminders at every turn. McCulloch Farm was purchased in 1927-28 by Warren McCulloch and his wife, Rook. The land was set up for Camp Aladdin, run by Rook and a group of educators. Over time it became a Rum Runner’s nest, was eventually abandoned, and finally condemned by the town. The original home on the property was restored and added upon, while the lakes on site were dammed up to maintain the water level on the farm and provide the ideal venue to swim, boat, and fish. Camp Aladdin, supported by charities, fell victim to the economic downfall of the Great Depression. Consisting of 600 acres of almost entirely dense woodland, the McCulloch’s set out to leverage the land for farming purposes. This required the clearing of land that to date, still consists of approximately 15 acres utilized for pasture. During World War II, the farm operated a dairy herd and a stone milk house that became a residence and barn, adding to the historical documentation of this property. Over time, the farm acquired its first equine, 2 small draft horses. This ushered in a succession of horses that were bred on site. Training, showing, buying, and selling horses were all part of learning the horse business. The aim was to breed winning in hand and pleasure horses such as jumpers, hunter hacks, road hacks, trail as well as driving horses. Eminent Domain took a swath of land from the original 600 acres, for the Blue Star Highway (US I-95). Of the remaining 500 acres, 450 acres are now under a Nature Conservancy Easement to keep it green and undeveloped. Although this is a private farm, it is on the Connecticut Tourism maps, it had always been open to the public, - each year. In the 1950s and 60s, Jean, now Mary Jean Vasiloff, her husband Alex, and sons Christ and Tony, were active on the property. They participated in the major shows and club trail rides around New England. The farm hosted the Whippoorwill Horseman's Club for over a decade. This provided students of the club the opportunity to showcase what they had learned. From this came The Morgan Horse Demonstration. This evolved into the widely known Morgan Horse Versatility Event (the last of these was held in 2010). Two Open Barns were held annually on Memorial Day and Columbus Day weekends. Alumni of the club bring their own children to the farm, and together they take part in all farm activities, which have become wonderful vehicles for exposing non-horse people to the breed, the farm, as well as land preservation. 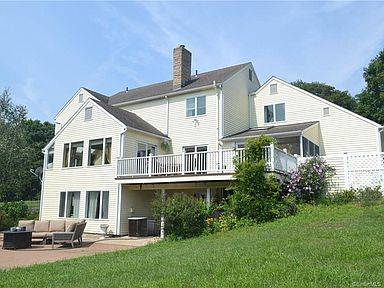 The town of Morris is located in Litchfield County with beautiful land, Rolling Hills, Bantam lake, the CT Wine Trail, antiques, fabulous restaurants and easy access to New York. You have plenty of room for everyone here. The home is perfect for a growing family with 4 bedrooms in the main home and then a sunny and bright, fully applianced in-law in the lower level. There is a large 1 and a half story barn with 5 stallls, tack room, hay storage and office. There are several paddocks and riding ring among the lush gardens.