Philadelphia is known for its Revolutionary War-era historical sites like Valley Forge, its large cities like Philadelphia and Pittsburgh, its farming regions, some occupied by the Amish, and a (once)-strong industrial history.

With equally large swaths of cities and towns as fields and mountains, Pennsylvania is a rich and varied state, as well as a worthy travel destination. Pennsylvania is bordered by the states of New Jersey, New York, Delaware, Maryland, West Virginia, and Ohio.

The Commonwealth of Pennsylvania is a geographically diverse state with a Great Lake on one shore and a major seaport on the other. The climate of Pennsylvania is pleasant, with cold, often snowy winters, mild to hot, humid summers, and gorgeous green springtimes, and most notably, spectacular displays of colorful autumn foliage.

A study released in the summer of 2003 by Penn State University shows that Pennsylvania's horse industry is massive and thriving, contributing big bucks to the state economy. And it's preserving more than a million acres of state farmland.

$8.2 billion or 18 percent of agribusiness sales, the state's largest industry, can be attributed to horses. The $8.2 billion refers to investments including land, buildings, machinery, etc., and does not include the value of the horses themselves, an additional $1.3 billion.

The study shows the total value of Pennsylvania's horses more than doubled since 1990, from $620 million to $1.3 billion. The industry's total investment in land, horses, buildings, trucks, trailers, tack and other assets, is a whopping $9.5 billion.

Not included in the study was money spent by residents of other states and countries who come to Pennsylvania to ride or compete. The Pennsylvania National Horse Show estimates that out of state competitors spend $40 million each year on hotels, meals, shopping, and more during that show alone.

Among the study's most interesting findings is that the amount of land devoted to horses totals 1,140,000 acres, valued at $4.8 billion. 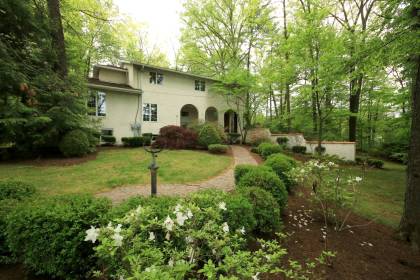 One of a Kind Equestrian Estate in Central Pennsylvania 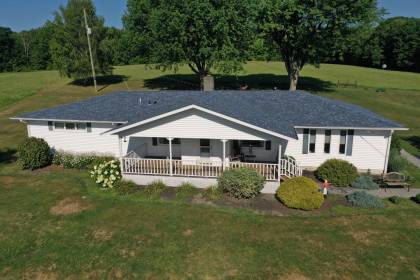 You have the horses, we have the place for you!

Awesome private rural setting on 28+/- acres in the beautiful Endless Mountains of Wyoming county. Property has beautiful well maintained 3 bedroom home , Fabulous 2 story bank barn. Great for both storage and farm animals. The barn was formally home to horses and has a large field area that is well maintained and could easily be utilized for pasture, or enjoy the property in its natural splendor. The sale also includes a giant 5+car garage, which includes a finished heated workshop perfect for whatever you can imagine. The interior and exterior are immaculately maintained. The exterior grounds have mature landscaping, sidewalks, paved driveways and an endless array of nature and wildlife 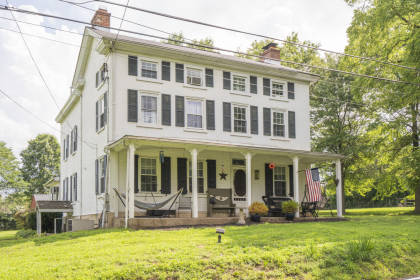 Own the best of both Worlds! Horse Farm in Collegeville - Trappe area

Welcome home to one of the remaining historic and charming gentleman's farms in highly desirable Collegeville-Trappe area. With a 5 stall barn here is your chance to have horses, goats, chickens, dogs, cats and more! Enjoy nature’s beauty with this historic 1814 farmhouse sitting on 5.42 beautiful acres including fields, pastures, mature fruit bearing trees and a partially wooded area including a stream! Beautiful original hardwood floors, multiple fireplaces including a large stately family room fireplace. 2 sets of original winding wood staircases lead to 3 bedrooms and full bath on 2nd floor. The 3rd floor consists of bedroom and very large walk in closet or sitting room. Relax and unwind from the covered front porch or enjoy the peaceful backyard as you watch the horses graze the pastures from the rear covered patio. In the winter months, enjoy your view from the family room addition with plenty of windows and natural light. Zoned R2 - Possibility to sub-divide. This is an opportunity you don't want to miss! 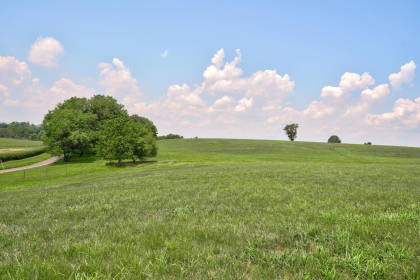 Absolutely stunning piece of property with magnificent views for miles over the breathtaking countryside of Chester County! Set along a country road, this 78+/- acre property contains two parcels (20 and 58 acs) which are ONLY BEING SOLD IN ITS ENTIRETY. The property, with lush fields, is under a Brandywine Conservation easement (allowing a primary residence for each parcel along with a secondary residence on the larger parcel). The options for this property are numerous. Its layout is uncomplicated and a clean palate. One can enjoy if they just want to be close to nature while another may enjoy the Cheshire Hunt and numerous other equestrian disciplines in the area. Located in West Marlborough Township, it is known for its rich heritage and preservation of having over 75% of the township under permanent preservation. The surrounding area has a similar commitment to preservation with over 27,000 contiguous, protected acres. It is rare for a property of this size to be available given its natural beauty, location and numerous options. Enjoy the bounties of this spectacular property with low taxes while still being close to shopping, arteries and the award winning Unionville Chadds Ford Schools. 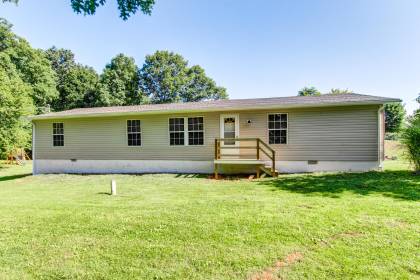 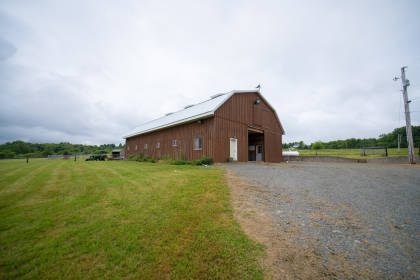 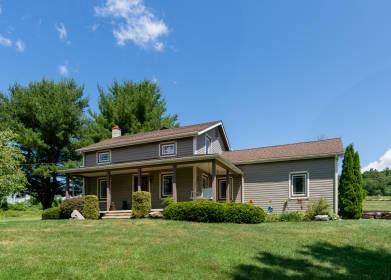 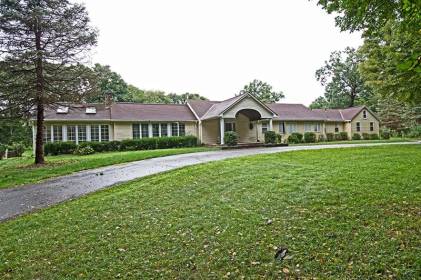 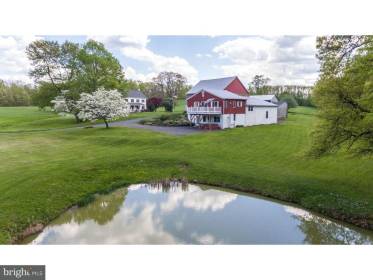 This property is for sale by owner. Owners require 24 hour notice for showing. Coordinate visit with Kathleen 267-374-6625. Email for information at kmkelly1960@gmail.com Serious buyers only. Appraisal available for potential buyers. If you are using a realtor, please have your realtor contact us for a negotiated commission. Bucks County Farmhouse built in 1820, A long driveway on a quiet country road leads to this Gentleman's Farm, set on 30 picturesque acres, offering total privacy and serenity. Are you looking for room to spread out? Do you want to slow down or quit the rat race and work from home? This Bucks County Estate features an 1820 farmhouse, a 2 story barn, a pond, various outbuildings, a new renovated business office in the barn and many other features. The farmhouse combines the perfect amount of charm and character of yesteryear with the conveniences desired today. It boasts a galley kitchen with large pantry, a spacious dining room perfect for entertaining friends and family, a full bathroom on both floors and 3-4 bedrooms located on the 2nd level. Heirloom features can be found in every room including hardwood floors, hand notched ceiling beams and deep windowsills. A propane stove and hearth made with field stones collected from the property make for a cozy living room. Professionals will appreciate a small office on the 2nd floor and much larger office in the barn. The 2 story carriage house offers its own utilities and would make a charming in-law suite or permitted apartment, with 2 bedrooms, a full bathroom, living room and kitchen on the upper level. The lower level boasts a media room with hardwood floors, storage space, propane stove and large 20x12 deck over looking the properties pond. While property is not currently a horse farm, it can be easily modified for equine enthusiasts. There is an existing bank barn and tillable acreage for growing your own hay, Plenty of storage for hay, straw and other needs. This large property is the perfect space for llamas, sheep, chickens or other livestock. Animals not your thing? find the perfect spot for an in ground pool and use the private surroundings to entertain friends and family. This property is enrolled in the Act 319/ Clean & Green for tax assessment, but can be subdivided for additional homes or development. Although you may not want to leave this tranquil paradise, numerous restaurants and shops are found nearby. Close to PA Turnpike, Routes 309 and 78 this the perfect location to offer privacy but close to major highways. Come enjoy life in a private setting with your own farmstead which offers a peaceful retreat and endless possibilities. 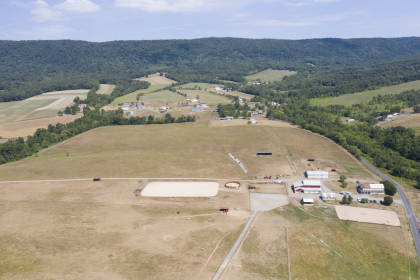 FOR THE LOVE OF HORSES! Formerly home of Rhody Ranch, Equestrian Center for training, stud service, boarding and lessons, helping children and adults develop equine devotion through knowledge, caring and commitment. This property offers improvements to enhance the comfort of your horses, including heated water to the fields. All 17 stalls (minimum size 10x12) are finished with hardwoods (Oak) grown on-site. 11 fenced pastures, 5 fenced paddocks; 11 run-in sheds.