Horse Farms For Sale in Maine

Maine is the most sparsely populated US state east of the Mississippi River. It is called the Pine Tree State; nearly 90% of its land is forested. In the forested areas of the interior lie much uninhabited land, some of which does not have formal political organization into local units, a rarity in New England. The Northwest Aroostook, Maine Unorganized territory in the northern part of the state, for example, has an area of 2,668 square miles (6,910 km2) and a population of 27, or one person for every 100 square miles (260 km2).

Bill Caldwell, one of Maine's favorite journalists, once wrote "The weather out there changes every day. And every day I enjoy it more. If you like weather, you love Maine. In one day Maine can get up to five kinds of weather. In one year, we get 10 seasons."

So although the weather may be changeable, it's never boring. While winters are long, there are many days that are cloud-free and brilliant. Also good news is that the climate along the coastal region, which extends inland for about 20 miles, is moderated by the Atlantic ocean which makes for milder winters and cooler summers.

Maine has the traditional form of New England government - home rule - said to be the only existing type of "pure" democracy. This means that state government has relatively little power, and that the town and cities make all their major decisions by citizen vote through the vehicle of annual town meetings, usually held in March. In many of Maine's 450 smaller towns and plantations, this is one of the major social events of the year, usually with refreshments and, more often than not, a potluck dinner or supper.

There are only a couple of dozen larger cities that are ruled by city councils, although more towns are beginning to elect some officials and hiring professionals to manage their day-to-day business.

Maine's  Agriculture outputs include poultry, eggs, dairy products, cattle, apples, maple syrup, potatoes and wild blueberries. In fact the state produces 25% of all blueberries in North America, making it the largest Blueberry producer in the world! Fishing once a mainstay of the state's economy, maintains a presence, particularly lobstering and groundfishing. Western Maine aquifers and springs are a major source of bottled water.

Every-once in a long time does a property like this become available a Tree lined private drive brings you to this impressive equestrian antique Windsor home situated on 12.0acres and with over 3000 square feet of living space and an oversized barn system for your enjoyment and pleasure .The charm and character of the past that has been updated and ready for today ! The home has 5 bedrooms , 3 full bath and 2 half baths and four entrances .There are two kitchens , two staircases, two soaking tubs, two porches , two furnances a pool and four entrances .The home is ideally set up with two distinct living areas .You will enjoy the remodeled Cook s kitchen with granite counters with island, . cabinetry ,Gas cook stove , stainless, appliances, wood wainscoting , brick chimney and wood stove for warmth. A front covered porch is just off the kitchen .A family room is adjacent with an office a formal living room with brick hearth and wood stove. Continue on and see the Dining room, as second full kitchen with granite and full bath with soaking tub and shower.Off the 45 by 31 back deck there is a 27 round pool . Kool off overlooking the pastures ! Upstairs there are 5 bedrooms and two full baths . one has a claw foot soaking tub . The barn system is impressive with 4 stalls and room for more , a tack room , chicken coop, wood storage and a huge insulated work room on the side and insulated water supply in the barn.There is 4191 square feet total for this barn system . Storage for many years supply of hay .and the insulated work room is 44 by 11.8. A gravel drive was installed from the paddock to the outside covered area for horses and a round pen area of 60 feet and pen extended to 100 by 65 . all this and many acres of bush hogged fields fenced with cedar posts and 3 strand electrical braided wire. This property is ideally suited to be multifamily as two separate living areas. Could be a duplex ,Air B & B or a Bed and Breakfast ! Home and Business Possibilities 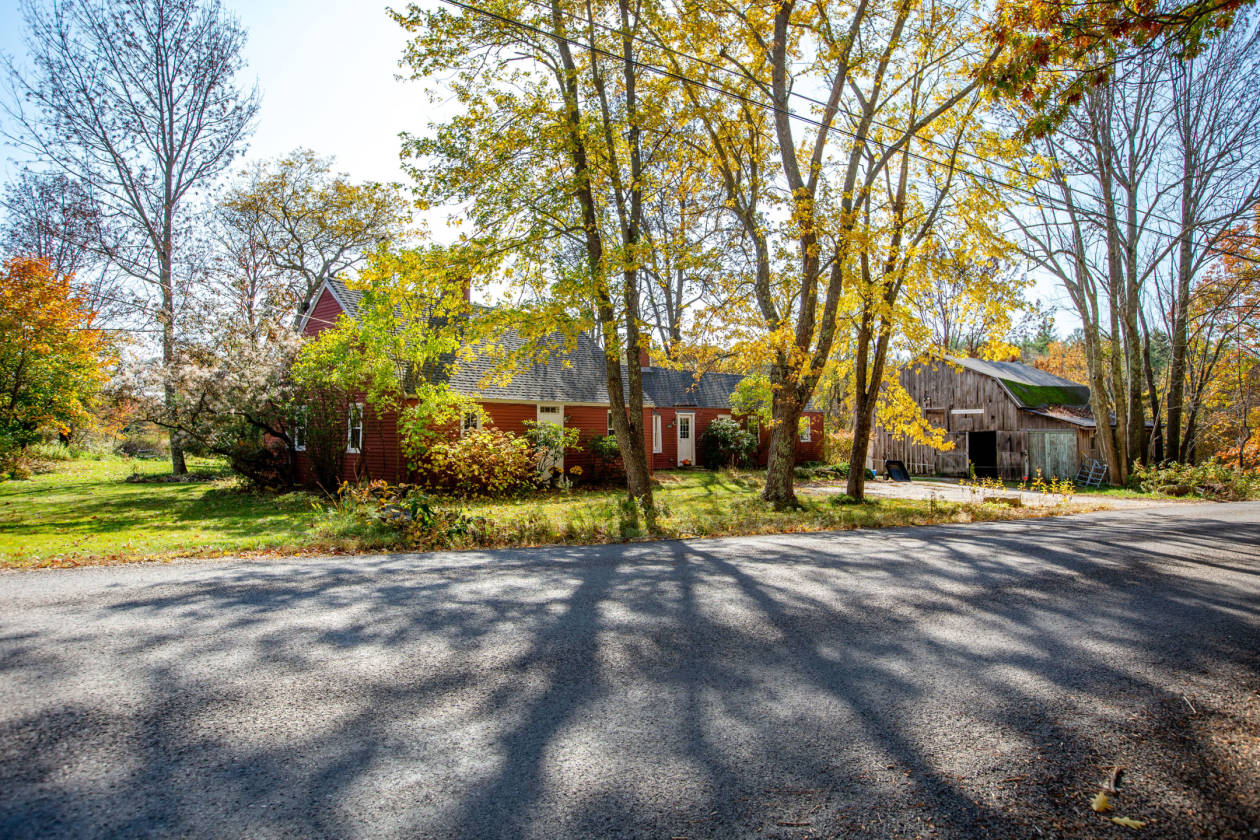 A barn with 4 stalls (3 horse, 1 pony) and hay storage above, a paddock, a run-in shed, and outdoor arena make this nearly 10-acre Pownal property a must-see for ''horse people''! The antique cape home offers original features as well as updates made across the centuries. Since 2002, all windows have been replaced, chimneys have been lined, cellulose has been blown in to cap and kitchen walls, home and barn have been rewired, wood stove insert and Rinnai have been installed, and house shingles have been replaced. Antique homes require a passion....here is a bucolic setting where you can follow that passion...for horses, for antique homes, for a rural Maine lifestyle! 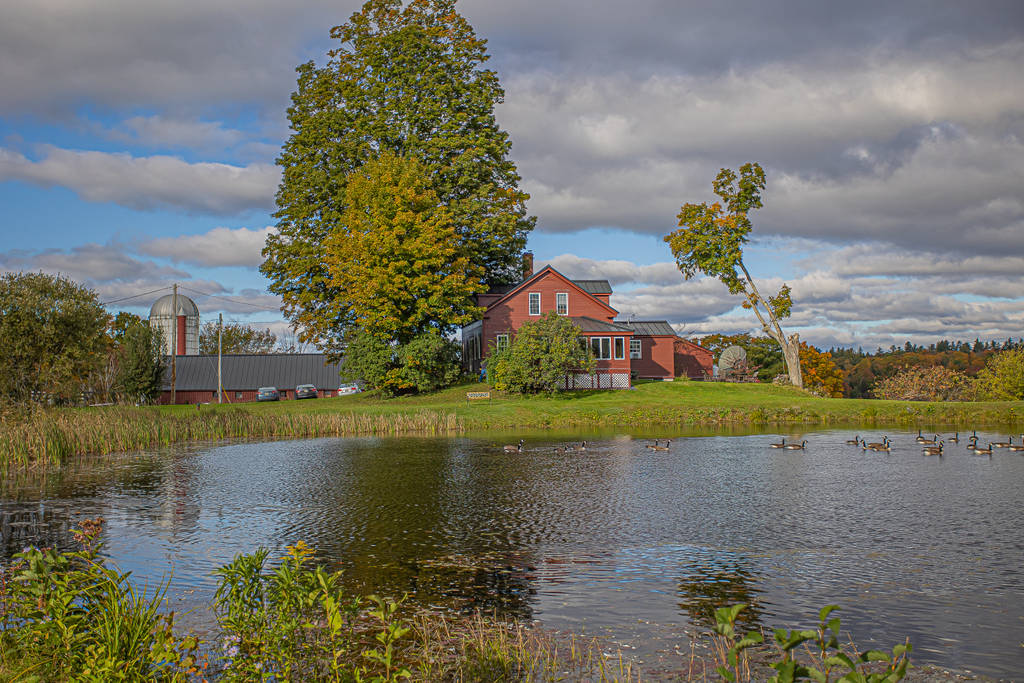 Rare opportunity to own an amazing home and farm perfect for horses, livestock, gardening, and all your farming needs. If you desire a beautiful homestead with large acreage and abundant wildlife, look no more, here it is! Brookvale Farm sets on 205 +/- acres which consists of fields, woods, private farm pond, and Fall Brook that runs through the property. The meticulously restored and updated farmhouse was built in the 1840's and boasts specialty figured native hardwood and wide pine floors throughout. The home has 5 bedrooms, 2 baths, a beautiful kitchen with granite counters and island, custom cherry cabinets and a woodstove insert to keep you cozy on cold winter nights. The large 65x36 barn can be used for animals, hay storage or could be a spectacular event venue for weddings and other activities. The house has attached and detached garages, lean-to storage shed, and the property comes with a whole house generator for your comfort if the power goes out. Relax in the sauna and then sit by the open firepit to enjoy watching the gorgeous sunsets and wildlife in the pond, fields, and woods. The setting is a tranquil paradise for geese, moose and deer. The property is currently used as a farm producing hay crops on approximately 60 +/- acres, however, these uses are endless here. Come take a look today and make this your next home, farm, or other endeavor! See MLS 1545539 and MLS 1544878.

Rare opportunity! This equestrian center has an impressive 70 by 140 indoor riding arena and 34 stalls with living quarters. Also on site is a charming Ranch style home with 2 Bedrooms open living to kitchen, laundry, and full bath. The Main house is split into 2 residential spaces, 8A & 8B. 8A has a spacious layout with 3 bedrooms and full bath with soaking tub and stand-up shower, laundry on the upper level. The lower level has open kitchen living space with full bath, office, and unfinished sauna. 8B is a log cabin with first floor bedroom and full bath, kitchen with bar and dining as well as a beautiful stone fireplace. The upper level of 8B has a loft and bedroom with half bath. By the inground pool is the pool house that has been nicely updated. The pool house offers a quaint living space with bedroom and full bath with laundry. The property also has a rustic cabin with 2 bedrooms a living room, kitchen, and full bath. This impressive property sets off the road with fantastic views and amazing stature. Waterfront on the West branch of the Wesserunsett Stream that enters Smith Pond. You will enjoy amazing views of Smith Pond all year! 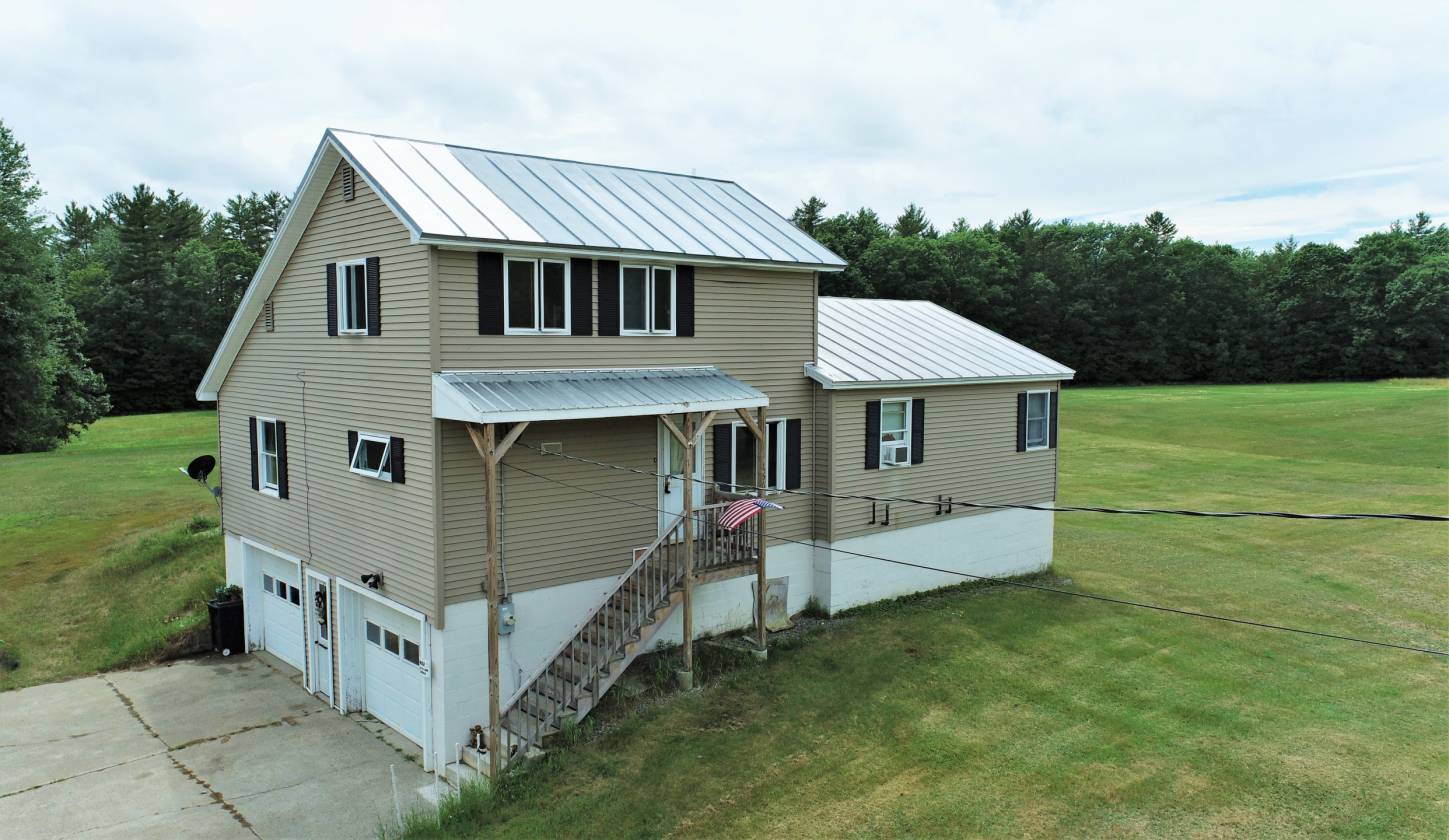 Spacious home with 13.1+/- Acres, 4 bedrooms and 2 full baths with generator hook up and garage big enough for a workshop and 3 vehicles. Kitchen with space for dining has great flow into the living spaces. Located just 13 minutes from Skowhegan, 24 minutes to Waterville, and 27 minutes to Farmington. Pole barn for storage too. Room for 3 12x12 stalls. 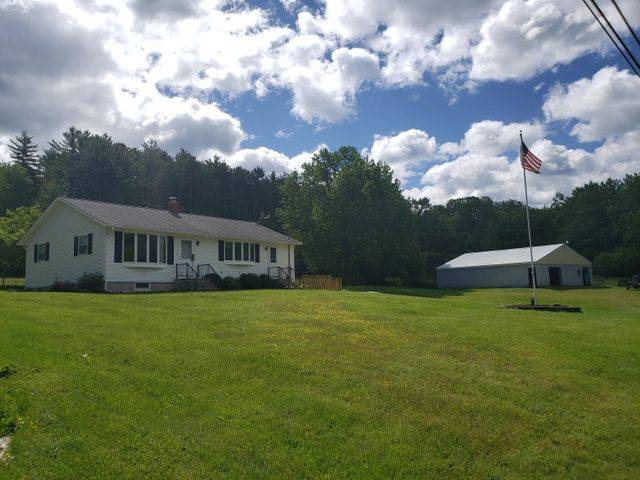 Ranch style home with fields, barn and a run - in stall.

NEW WINDOWS INSTALLED THROUGH THE ENTIRE HOME, FRESH COAT OF INTERIOR PAINT, HOT WATER HEAT PUMP AND PELLET STOVE, MOVE IN READY!!! This one owner home is situated on 48 acres that offers fields for livestock, hay or crops, woods with healthy tree growth and abundance of wildlife along with a brook and pond. This three bedroom one and a half bath sits on a full basement that has a 19'x26' finished off great room and is heated by a brand new pellet stove. It is also ADA accessible via a chair lift with interior access as well as from the garage. All bedrooms, baths and laundry are conveniently located on the first floor. The barn can be used for cattle as done in the past or for horses and other livestock with plenty of room for equipment and toys. For you outdoor enthusiasts, enjoy hunting, hiking, biking on this beautiful land. Located only minutes from multi-use recreational trails, lakes, rivers and ski mountains. COME AND EXPLORE THE POSSIBILITIES!!!

This beautifully renovated and meticulously maintained mid-1800's turn-key Greek Revival equestrian property is situated on an estate-like setting. A showcase of country living at its finest with all the modern conveniences, this 3 bedroom, 1.5 bath home has been completely updated throughout. New interior paint, with primary color choices by Habitat Design, and beautifully restored hardwood floors adorn this lovely home. The kitchen boasts butcher block countertops, new red birch floors and updated appliances. There is a formal dining room and a bright sitting room containing a completely restored Beehive oven that is the heart of the home during the winter months. An elegant great room offers ample space for a living room and den/home office. A powder room, mudroom and large laundry room complete the first floor. The second floor hosts an expansive primary bedroom, two other large bedrooms and a beautifully renovated bathroom. An expansive deck off the sitting room allows for outdoor dining and large gatherings. The 20'x40' Ell offers a vehicle/tractor storage area and an expansive wood/workshop, which could easily be converted to a two car garage. The second floor of the Ell offers room for an in-law apartment or expansion options for the house. The 40'x50' barn hosts 4 box stalls, a large chicken coop, a grain room and a wonderful tack/lounge area. Off the back of the barn are 3 large paddocks, one which can also be utilized as a riding ring and another with a 12'x20' horse shed, all of which are surrounded by 3 rail board fencing and contain beautiful shade trees. The grounds are adorned with 100's of feet of perennial beds, heirloom apple trees, lilac borders, raised beds for vegetable gardens and 3 acres of invisible fence. All systems have been updated and the property also contains a full farm generator. Located in the bucolic setting of Pownal and is just a 5 minute drive to downtown Freeport and 295 and 20 minutes North of Portland.

THE BEST OF BOTH WORLDS A BEACH FRONT OCEAN PROPERTY WITH ROOM FOR THE HORSES!

An amazing opportunity to purchase one of the last significant parcels of undeveloped land in Southern Maine! This gorgeous 155 +/- equestrian center boasts 2 stables with a total of 14 stalls a free-standing 125’x95’ indoor arena and a 90’x150’ outdoor arena. There are approximately 22+/- acres of pasture/farmland, 133 +/- acres of gorgeous mixed growth forest with miles of established riding and hiking trails and approximately 3000+/- ft of footage on the West Brook. The property abuts the Perkinstown Wildlife Commons, an additional 288 acres of trails, making this property ideal for the equestrian, hunting, fishing, and overall outdoor enthusiasts! Additionally, development opportunities abound with 1,400 +/- of road frontage and multiple access roads. An ideal location for a multi-generational compound and more. Less than 10 minutes to Wells Beach, the Amtrak station, Maine Turnpike, 30 minutes to Portland and Portsmouth, NH, and an hour and a half North of Boston.