Pakistan Star: The Unsung Story of A Winning Horse

From a stunning debut win to a controversial mid-stop, Pakistan Star has been under the spotlight and the shining star of tabloids in horse racing. This talented galloper got his fair share of fame before he was rumored to be sent off to a horse farm in Dubai. As he was disappointing quite some fans losing their money betting on the stunning beast, Pakistan Star went through a roller coaster of a ride to get back to where he started from. 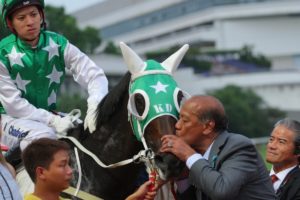 Pakistan Star: The Unsung Story of A Winning Horse

The Star Shines Down

On March 2nd, 2013, a star was born. A German-bred, brown-colored horse, he was formerly known as Nina’s Shadow. Born at an equestrian estate in Gestüt Wittekindshof in Sauerland, Germany, he was bought by his current owner Din Kerm for HK$6 million at the Hong Kong International Sale.

It all started when The Jockey Club eagerly paid HK$1.8 million for the young horse intending to sell him in the Hong Kong International Sale. Everything was going well until the day before the breeze-up.

According to Mark Richards, who was the Jockey Club’s Hong Kong International Sale director, “His quality was unmistakable, but he was totally lost that day. Everything continued to go really well until he just stopped in the tunnel going out on to the track and wouldn’t move — no reason why. Then on the breeze-up day, he refused to go past the cooling fans on the outside of the track. He ended up having to be hard ridden to get going at all and didn’t finish off his gallop well. I was a bit gutted because we knew he had some talent.”

Then came the sale night, and it seemed that the uncanny stunt pulled by our youngling had put off the bidders. If he hadn’t had those hiccups mid breeze, he easily would’ve topped the sales charts.

A horse property owner and the proud owner of Pakistan Star, Kerm Din, reportedly said, “It was jumping HK$500,000 per bid. Luckily, when they got to HK$6 million, the under bidder must have thought, ‘I’m not going against this guy, he is crazy,’ so he stopped there … I would have gone to HK$8 or HK$9 million. I wouldn’t have stopped, as I only wanted one lot, Lot 14.”

After this, it was like the Pakistan Star had his head up in the clouds because the three-year-old seemed to be flying in races, appearing out of nowhere, leaving everybody stunned. He won almost every trial after missing the start and built a trusting relationship with his owner. However, this was not enough to convince the punters, and people were not as hopeful for an exciting performance when it came to the 1200m Griffin Race.

These races are categorized by the horses who have never participated in a race anywhere in the world. A horse that is imported to Hong Kong unraced is known as a Griffin. And with all the inexperienced horses having their first season, one can only base their decisions on the trials they have seen before selection.

As the Griffin Race began, Pakistan Star was sent on the position of 15-1 outsider. As usual, it was a slow, steady start. So slow that it was likely he wouldn’t be able even to keep up, let alone win. But low and behold! Pakistan Star, who had even disappeared from the camera frame of the race footage, was suddenly the only horse galloping along with the group. Hoofing his way through to the front with jockey of that time Matthew Chadwick, making their way until they won the race, Pakistan Star didn’t stop. Yes, Pakistan Star has come out of the race with victory assigned to his name.

It was all high from then onwards as the video footage where Pakistan Star gallops his way in the frame, went viral online and on television. With all kinds of media outlets featuring his name and his spontaneous stunt, the horse had left a heavy hoof mark on everyone’s mind globally.

The news was so widespread that it even made waves in the owner, Din’s native country Pakistan. The name was enough to have the people sing songs in praise of the mighty animal that had marked Pakistan on the map of the world horse racing arena. The news was intensively covered by local outlets and news channels in Pakistan. As well as sensationalizing YouTube videos surfaced commenting on the amazingly talented horse and the downright magical moment of the Griffin Race.

With a solidified talent and fame grown out of proportion, he was a 1.7 favorite. And as on to the next scheduling of the season, it all reached new heights. Pakistan Star not lived up to the mega hype but further accelerated it by pulling off another commanding victory from behind.

The public had, by this time, lost all calm. The horse was a sensation. Pakistan Star had become such a famous name that even those who had no clue about horse racing were invested and sold for the horse’s performance.

The Bump on the Racecourse

He went on to perform to greater extents over the years for houseful crowds and cheering punters throwing their money at him before coming to a halt.

Pakistan Star suffered his first defeat to Australian Group Three winner Mr. Bogart on October 16th. People suggested using AI to monitor the horse. Having changed 3 to 4 riders and consistent second to third ranking defeats, Pakistan Star hit a permanent race ban when he pulled off yet another stunt. Talk about horse stunting!

Facing only four of his rivals of that time, Pakistan Star was standing at a 1.2 favorite when he came last. Why, you ask? Because the horse stopped the mid-race at the 1400m mark and refused even to nudge. The rider of that time, Joao Moreira, eventually succeeded in convincing him to finally cross the finish line, one minute after all the other horses.

Two successful trials later, Pakistan Star was back in business. As of February 25th, Pakistan Star’s next mission in line was the Citi Hong Kong Gold Cup, which he went on to win.

Author Bio: Claudia Jeffrey is currently working as an Editorial Manager at Crowd Writer, an excellent platform to buy assignment UK. She has excellent writing skills and general knowledge to back it up. She shares her personal interests through blogging at WordCountJet.