Things You Did Not Know About the Appaloosa

Spot horses have been in existence for many years. A depiction of their images have and are seen in ancient cave wall portraits throughout the prehistoric world. An example of a breed of spot horses is the Appaloosa horse. This horse has a pleasant disposition. Hence, it has been capturing the hearts of many horse enthusiasts for many years. Additionally, it has a salient appearance and compliance with a variety of uses and situations. However, the Appaloosa horse has been experiencing challenges from its existence to date because of the dispersion and dislocation of Native Americans who first came to know about its existence. 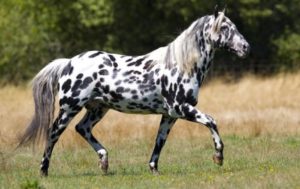 Many people often wonder “How long do Appaloosa horses live?” Others, on the other hand, try to ponder, “What are Appaloosa horses used for?” Well, you do not have to overthink about it, instead of that, you may look through already written essays to take some information. Appaloosa horses have a lifespan of about 30 years due to their healthy, hardy, and adaptable capabilities. And, due to their versatility nature they are used for racing, pleasure, rodeo events, long-distance trail riding, and working cattle among other English and Western riding sports. Despite being recognizable due to their beautiful spots, there are other things which make this horse easy to identify. And, below are some appaloosa horse facts you need to know.

The Appaloosa horse became a state horse in 1975, after a legislation signing by Cecil Andrus, the Idaho governor. Additionally, the Idaho state is the first one to provide a custom license plate presenting a state horse.

Three additional things albeit their spots

It is easy for a person to identify an appaloosa horse because of its beautiful spots. But, there are some additional things which make these horse easy to recognize. They include a mottled skin around the anus, eyes, genitalia, and muzzle; eyes with a white sclera, and striped hooves. However, these traits are not exclusive to the Appaloosa breed. Contrariwise, many Appaloosa horses have at least two of these attributes.

Appaloosa horses have coat colors which incorporate a combination of base color and overlay of spotting pattern. Base colors include chestnut, roan, dun, bay, gray, buckskin, black, grulla, and palomino. There are numerous distinctive pattern dissimilarities to the markings.  For instance the buckskin appaloosa. The spots have an overlay of dark skin with a halo surrounding that is, the skin next to the spot is dark as well. However, the overlay of the hair coat is white.

Nez Perce people live in Oregon, western Idaho, and eastern Washington. They geld or emasculate inferior horses and trade away inadequate stock to enhance or enrich the breed. These people became exceptional horse breeders by the early 19th century.

Appaloosa horses were first known as ‘Palouse horses” by settlers

Back then, settlers did refer to Appaloosa horse as Palouse horses. This is because the Palouse River ran through what was before the Nez Perce country. Due to progression in time, the name had many changes which include Apalouse, Appalucy, Appalousy, and Appaloosie. Afterward, they came to settle on the name Appaloosa.

Many people often wonder where appaloosa horse breeds are used. Well, you do not have to wonder anymore. Appaloosa horses are often used in television series and Western movies. For instance, Cowboy, El Dorado, The Appaloosa, Cojo Rojo in the Marlon Brandon film, and the mount of Matt Damon in True Grit.

The introduction of appaloosa horses had changes in the culture of the Nez Perce people forever. They hence were famous people throughout the Northwest because of their craftsmanship and hunting skills in addition to their horse breeding. Additionally, they were more nomadic trading their stone community homes for tipis.

In conclusion, there are many horse breeds which people breed for different purposes. Also, there are some unique and outstanding features these horses have that distinguish them from other horses. For instance, the palomino horse(s) has spot patterns and markings on its hair coat. Appaloosa horses are also popular for their uses and characteristics. So, if you want to know something about appaloosa horses, consider the appaloosa facts above.

Author’s bio: Darren Barden is among the most beneficial education advisor over the internet working with WriteMyEssayForMe. Darren delivers very helpful suggestions in the college study field. He is really a solid believer in web-based education. As he is just not doing the job, Darren likes sports activities like baseball and sprinting. This guy typically meets new students to switch knowledge to supply practical ideas.