Rhode Island is the smallest state in the United States of America, tucked between Massachusetts and Connecticut in New England. Nonetheless, it has over 400 miles of coastline, courtesy of Narragansett Bay and islands such as Aquidneck Island, home to Newport, the "City by the Sea".

In historical perspective, tiny Rhode Island is actually the state that instigated the Revolutionary War when it denied any attachment to the British Crown. Oddly enough and counter to historical trends, the Ku Klux Klan posed a significant threat in the state following the Civil War. The huge influx of immigrants through all Northeast ports also drove their ire.

Economically Rhode Island is not capable of keeping up with other state productivity levels, but they have become known for healthcare. CVS, the pharmacy giant, makes its home in Rhode Island as does Amica Mutual Insurance.

Newport is one of the most popular destinations for tourists. The city, located on Aquidneck Island, is a collection of downright magnificent mansions. The properties remain largely privately owned. The stately mansions were built by the wealthy from both the south and the north. Newport is also the site for the annual Newport Jazz Festival. This music event draws thousands eager to hear the best in jazz and blues in one of the most beautiful environments in New England. In past years jazz and blues greats such as Muddy Waters, John Coltrane, and Miles Davis have dished up legendary performances.

The results of a survey of the Santana Center in 2007 shows that Rhode Island (RI) has a thriving equine industry. Using both veterinary and owner surveys, they were able to determine that horse numbers in Rhode Island in 2006 ranged between 6814-7301. Due to the small size of the state and the concentrated rural areas, the density of horses in Rhode Island may be one of the highest in the country. With a land area of 1,045 mile2, the horse density would be approximately 6.5 - 7.0 horses/mile (if uniformly distributed). If only non-urban areas are considered, horse density would be between 11.8 - 12.7 horses/mile.

Rhode Island was historically one of the most important horse areas of the country. In the 1600's, breeding farms shipped Narragansett Pacers to all of the sea coast colonies and as far as the Caribbean for use on plantations. RI was the only colony that allowed horse racing and a one mile track was maintained at Sandy Neck Beach in South Kingstown. Rhode Island continues to be horse country. Even though you may not see many large sprawling farms, horses are tucked into backyards, small stables and back fields. 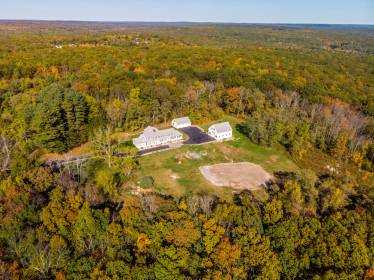 Welcome to Journey's End Farm! As the wrought iron gates open before you, the serenity of the thousand foot driveway is overwhelming. There at the pinnacle of the property, stands a Colonial Farmhouse from the 1700s. The expansive property (19.7 Acres) boasts a breathtaking view of southeastern Rhode Island, since it's atop Nipmuc Hill. The impeccably maintained home features six bedrooms, three and one half baths, original variable width red oak floor planking, 5 fireplaces, bread ovens, and kitchen and bath granite upgrades. Additional amenities include a wine cellar, separate au pair / in-law living quarters with private entrance, three car garage with storage above, and a 7 stall horse barn with loft and cellar. New septic system was installed in September of 2019. This unique estate has unlimited potential for use as a horse farm, winery, vineyard, or wedding venue. Two additional lots may also be sectioned from this sprawling estate. 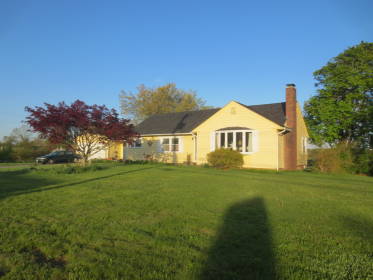